for these free STRATMOR
online publications

Reach out to us to discuss
your specific needs.

How Can Mortgage Originators Improve Their Communications Skills?

I heard a loud crash in the kitchen the other day and walked in to find my one-year and three-year-old children standing in a lake of milk and Rice Krispies, staring down at a broken bowl. “What happened?” I asked. The one-year-old was silent. The three-year-old blurted out, “Nothing.” “Are you sure?” I asked. “It was her!” she said, pointing to the younger one. And just like that, my kids hit the trifecta of bad communication: not communicating enough, sharing inaccurate information, and blame shifting. Lucky for them, the stakes were low — a little help cleaning up the mess and all was forgiven. For mortgage loan originators, the stakes of good communication are much higher and could affect their very survival in this tough economic climate. Our question this month: “How can LOs improve their communication skills to create raving fans?”

The Impact of LO Communications on Borrowers

The mortgage industry is cyclical, as some are painfully experiencing for the first time in recent years. But one thing never seems to change: Communication consistently tops the list of problems most cited by mortgage borrowers. Year to date, nearly one in four borrowers (24 percent) who had a problem in some area of their mortgage journey attributed it to communication issues. Not only was communication the most frequently cited issue, but it was also among the most damaging of problems, causing the Net Promoter Score (NPS) to drop to -60, all but negating a chance at a referral and more than likely causing negative word of mouth. 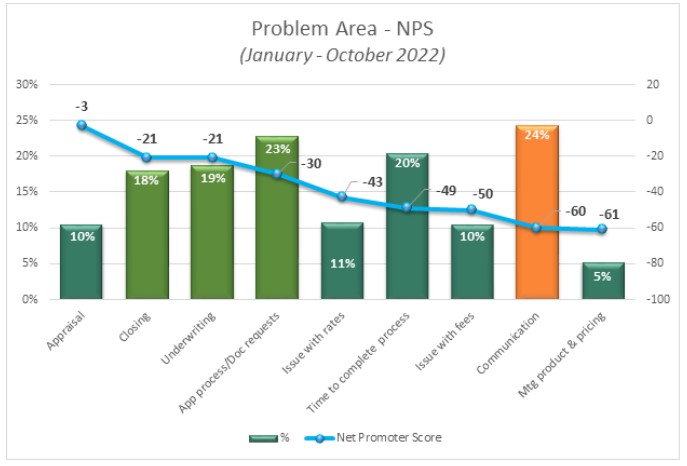 I’m often asked for a “silver bullet” area of focus that will provide immediate and meaningful lift to a lender’s overall customer experience, advocacy and loyalty. My knee-jerk reaction is to say “Communication,” but that’s really an oversimplification. It’s like saying, “If you want world peace, all you need is for everyone to get along.” There is a great deal of complexity in how improved communication is worked out across the many steps in the loan process and across all the people and technology involved. In other words, if you really want to improve communication, you need to break it down by touchpoint and by person. You need to measure it, create visibility, and implement accountability. Only then will you be able to see the needle move.

As my kids so deftly exemplified, there are three main ways to blow good communication. Let’s consider how originators can avoid each of these pitfalls and keep borrowers on the “happy path.”

How did the borrower know that underwriting was a problem, you ask? You don’t need to be much of a sleuth to surmise that the originator told them, likely in an effort to save face and position themselves as the customer’s advocate. The problem is that this backfires nearly every time. It’s like a waiter throwing the chef under the bus for cold food and slow service. The customer may really like the waiter, but they’re not going to rave about the restaurant or send people there just to see the waiter. In the mortgage industry, borrowers who perceive the underwriter as a problem are more likely to badmouth the company than they are to promote it.

What’s the carrot at the end of the stick? A borrower that goes through the loan process without any of the forementioned pitfalls has an incredibly high NPS score of 97, a true “raving fan” advocate.

Here are three ways lenders can help LOs improve their communication and start growing their referral base exponentially:

Find out more about STRATMOR Group’s MortgageCX program and how transparency into the loan process can help your company. Contact Mike Seminari at mike.seminari@stratmorgroup.com.

Reach out to us to discuss your specific needs.

Feel free to reach out with any questions or needs we might be able to help with.